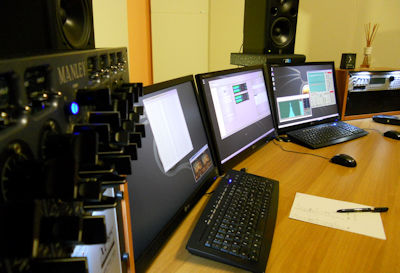 
I believe that "Vectorial Volterra Kernels Technology" is the path of the future and will enable analog sound to be implanted into digital DAW environments with real harmonic content and analog vibe. In my creation of these Nebula Programs, I use only top notch modern and vintage gear, precisely sampled by using my own proprietary technique with custom converters I have built specifically for NAT3 which outperforms top notch commercial converters. Ultra filtered and stable AC supply, high end cables, with particular care to the connections, levels and impedance matching were used to translate the sonic qualities of this priceless devices into the Nebula software technology. Every captured sample is analyzed and carefully listened. Every volume change, gain change, frequency change is tested and accurately programmed without destructive digital processing for optimized sound and then compared to the original device. The result is a virtually indistinguishable digital replication of this landmark device.
The hardware is sampled without introduction of noise or aliasing. The thinking behind this process is to provide the full quality of the analog behavior, which means placing all emphasis on quality over cpu resources. The process is extremely efficient and optimized to be used on current computer technology with a forward thinking to the future of more powerful systems, but this will be a more cpu-intensive device than your typical software. Consider the value in having even one instance of the original unit in your hardware rack and choose to see the true value in having the best sound that technology has to offer.
The preset doesn't sound processed, harsh or digital as many plugins do, but instead it sounds like a natural extension of the original audio, gluing your tracks in the mix with an analog vibe.

Golden Edition
Golden Edition is the last evolution in sampling and programming to answer at the customers demand for a program library which covers the whole sample rate range used in musical production: 44.1kHz, 48kHz, 88.2kHz and 96kHz. To make this a new resampling of the units was necessary, so why not to improve the audio quality also ? A revision of my custom-built self-made converters has been done, which employs a non commercial chip used in military satellites - thanks to my previous work into electronics and telecommunication lab (see Biography), I had access at that technology - and a new sampling and programming technique has been developed with custom template and build up process. The new Golden Edition library allows better sound with less - unnecessary - kernerls, i.e. less CPU/RAM load and less latency which doesn't make necessary anymore the LE version; new and useful set of presets to expand the possibilities by leaving room for creativeness.

Programs libraries are full compatible with licensed Nebula3 and Nebula4. NOT Nebula3 1.3.505 or N4-Player.